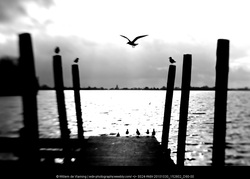 For what it is worth this is what I've come up as workflow / checklist: based on some Ideas of John Szarkowski , Stephen Shore and Adie Sethna

A summary of Szarkowski's introduction to the photographers Eye
A link to John Szarkowski 'The Photographer's Eye'?
Here's a PDF - online. http://www.photokaboom.com/photography/pdfs/john_szarkowski.pdf

The invention of photography provided a radically new picture-making process - a process based not on synthesis but on selection. The difference was a basic one. Paintings were made - constructed from a storehouse of traditional schemes and skills and attitudes - but photographs, as the man on the street put it, were taken.

The difference raised a creative issue of a new order: how could this mechanical and mindless process be made to produce pictures meaningful in human terms - pictures with clarity and coherence and a point of view? It was soon demonstrated that an answer would not be found by those who loved too much the old forms, for in large part the photographer was bereft of the old artistic traditions. Speaking of photography Baudelaire said: “This industry, by invading the territories of art, has become art’s most mortal enemy.”(1) And in his  own terms of reference Baudelaire was half right; certainly the new medium could not satisfy old standards. The photographer must find new ways to make his meaning dear.
[...]

The Thing Itself
More convincingly than any other kind of picture, a photograph evokes the tangible presence of reality. Its most fundamental use and its broadest acceptance has been as a substitute for the subject itself—a simpler, more permanent, more clearly visible version of the plain fact.

The Detail
Once he left his studio, it was impossible for the photographer to copy the painters’ schemata. He could not stage-manage the battie, like Uccello or Velasquez, bringing together elements which had been separate in space and time, nor could he rearrange the parts of his picture to construct a design that pleased him better.
From the reality before him he could only choose that part that seemed relevant and consistent, and that would fill his plate. If he could not show the battle, explain its purpose and its strategy, or distinguish its heroes from its villains, he could show what was too ordinary to paint: the empty road scattered with cannon bails, the mud encrusted on the caisson’s wheels, the anonymous faces, the single broken figure by the wall.
Intuitively, he sought and found the significant detail. His work, incapable of narrative, turned toward symbol.


The Frame
To quote out of context is the essence of the photographer’s craft. His central problem is a simple one: what shall he include, what shall he reject? The line of decision between in and out is the picture’s edge. While the draughtsman starts with the middle of the sheet, the photographer starts with the frame. The photograph’s edge defines content. It isolates unexpected juxtapositions. By surrounding two facts, it creates a relationship. The edge of the photograph dissects familiar forms, and shows their unfamiliar fragment. It creates the shapes that surround objects.The photographer edits the meanings and patterns of the world through an imaginary frame. This frame is the beginning of his picture’s geometry. It is to the photograph as the cushion is to the billiard table.


Time
Photographs stand in special relation to time, for they describe only the present.
Exposures were long in early photography. If the subject moved, its multiple image described also a space-time dimension Perhaps it was such accidents that suggested the photographic study of the process of movement, and later, of the virtual forms produced by the continuity of movement in time.
Photographers found an inexhaustible subject in the isolation of a single segment of time. They photographed the horse in midstride, the fugitive expressions of the human face, the gestures of hand and body, the bat meeting the bali, the milk drop spiashing in the saucer of milk.
More subtle was the discovery of that segment of time that: Cartier-Bresson called the decisive moment: decisive not because of the exterior event (the bat meeting the ball) but because in that moment the flux of changing forms and patterns was sensed to have achieved balance and clarity and order— because the image became, for an instant, a picture.

Vantage Point
If the photographer could not move his subject, he could move his camera. To see the subject clearly—often to see it at aIl—he had to abandon a normal vantage point, and shoot his picture from above, or below, or from too close, or too far away, or from the back side, inverting the order of things’ importance, or with the nominal subject of his picture half hidden. From his photographs, he learned that the appearance of the world was richer and less simple than his mind would have guessed. He discovered that his pictures could reveal not only the clarity but the obscurity of things, and that these mysterious and evasive images could also, in their own terms, seem ordered and meaningful.

The Nature of Photographs
Stephen Shore(2007)
Some Quotes

The nature of Photographs
How is this photograph different from the actual a scene that Robert Frank saw as he stood in his Butte hotel room and looked out on this depressed mining town in the northern Rockies? How much of this image is a product of lenses, shutters and media? What are the characteristics of photography that establish how an image looks? […]
All photographic prints have qualities in common. These qualities determine how the world in front of the camera is transformed into a photograph; they also form the visual grammar that elucidates the photographs meaning.

The Physical level
A photographic print is, in most instances, a base of paper, plastic, or metal that has been coated with an emulsion of light-sensitive metallic salts or metallic salts coupled with vegetable or metallic dyes. In some prints the base is coated directly with or imprinted with dyes, pigments or carbon. A photograph is flat, it has edges, and it is static; it doesn’t move. While it is flat, it is not a true plane. The print has a physical dimension. […]
As an object, a photograph has its own life in the world. It can be saves in a shoebox or in a museum. It can be reproduced as information or as an advertisement. It can be bought and sold. It may be regarded as a utilitarian object or as a work of art. The context in which a photograph is seen effects the meanings a viewer draws from it.

The Depictive Level
Photography is inherently an analytic discipline. Where a painter starts with a blank canvas and builds a picture, a photographer starts with the messiness of the world and selects a picture. A photographer standing before houses and streets and people and trees and artifacts of a culture imposes an order on the scene – simplifies the jumble by giving it structure. He or she imposes this order by choosing a vantage point, choosing a frame, choosing a moment of exposure and by selecting a plane of focus. […]
These four attributes define the picture’s depictive content and structure. They form the basis of a photograph’s visual grammar. They are responsible for a snapshooter’s ‘mistakes’: a blur, a beheading, a jumble, an awkward moment. They are the means by which photographers express their sense of the world, give structure to their perceptions and articulation to their meaning.

The Mental Level
You see a mental image – a mental construction – when you read this page or when you look at a photograph, or see anything else in the world. Your focus even shifts when reading this picture by Paul Caponigro. But your eyes don’t actually refocus (since you are only looking at a flat page). It is your mind that changes focus withing your mental image of the picture, with all the attendant sensations of refocusing your eyes. It is your mental focus that is shifting.
Light reflected off this page is focused by the lenses in your eyes on to your retinas. They send electrical impulses along the optic nerves to your cerebral cortex. There your brain interprets these impulses and constructs a mental image.
This, surprisingly, is an acquired ability. Patients who have had their eyesight restored after having been blind from birth at first only see light. They have to learn how to construct a mental image.
Pictures exist on a mental level that may be coincident with the depictive level – what the picture is showing – but does not mirror it. The mental level elaborates, refines, and embellishes our perception of the depictive level. The mental level of a photograph provides a framework for the mental image we construct of (and for) the picture.
While the mental level is separate from the depictive level, it is honed by formal decisions on that level: choice of vantage point (where exactly to take the picture from), frame (what exactly to include), time (when exactly to release the shutter), and focus (what exactly to emphasize with the plane of focus). […]
A photographer’s basic formal tools for defining the content and organization of a picture are vantage point, frame, focus, and time. What a photographer pays attention to governs these decisions (be they conscious, intuitive, or automatic). These decisions resonate with the clarity of the photographer’s attention. They conform to the photographer’s mental organization – the visual gestalt – of the picture.
Powered by